"We enjoy your well made orgonia pieces very much, and there is little doubt we can feel the energy around here is more positive and happy since hanging them up."

"Originally I imagined these plaques hanging in homes and bringing breathing space and peace to the dwellers therein, but then another image took hold as well - perhaps these would also have a place in boardrooms, and conference rooms, and places of power where difficult decisions of import are made, and where mood is sometimes just as critical as ideology and bias in coming to agreement. I saw them hanging in war rooms. Could these plaques influence thinking in high places? I think so. I hope so." 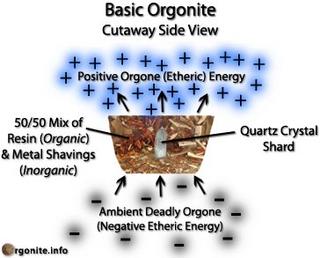 WHAT HAPPENED TO ME

I didn't fall in love with orgonite by way of theory - the theory of how this stuff works its little magic was so so improbable sounding to me at first that for years I didn't pay it serious attention even though I play around with so call alternative energy tools quite a lot. There is no lack of information about this stuff on the internet, and there are many thousands of people worldwide who go about spreading and literally planting little muffin looking bricks of orgonite like Johnny Appleseed broadcasting the planet with sweetness and wholesomeness. The people who gravitate to orgonite are a hoot frankly, and I have a few friends who just like to hang around with orgoniteers and go on "gifting runs" with them even though they can't much feel the energy themselves (consciously anyway.) If you are charmed by a certain sort of beautifully bent character then you might really enjoy orgoniteers, but what I now see is that it is the orgonite that bends them and frees them from something.  It's a cluster of souls bonded by a unique thing that has happened to them. It was the charm and buoyancy, and energy of these people that always kept me marginally interested in orgonite even if I couldn't make much sense of the physical theory. In fact, I recall that it was after watching this kid's Youtube about his orgonite making adventure:

that I was inspired one idle Saturday to take the plunge and make some for myself thinking that this young man had obviously been touched by something, and why not give it a shot. I went out and bought some BB's from Walmart, a quart of 3M fiberglass resin from Home Depot, some quartz crystals I already had, and on a whim I threw in some petalite powder left over from some kiln firing of energetic ceramics. I used what so many orgonite "gifters" use as a mold for simple field grade orgonite - a common muffin tin poached from the kitchen.

I very, very distinctly remember what happened next as the concoction began to harden in funky chunks. Fiberglass resin hardens pretty quickly in warm weather, so as I was sitting there watching the pot boil so to speak this most amazing feeling of warmth and relaxation spread through me as the resin hardened and shrank. The more the resin hardened the stronger the vibe became. There was nothing at all "subtle" about it - I was being carried along by something very special and very unusual. It is what I call not my "Ah Ha" moment but my "Ahhhh" moment. This was for me a "break" in my life or a bridge to something else entirely. Now, I have had a lot of somewhat similar moments under the influence of certain powerful crystals, but this orgonite energy was of another order - another magnitude. It was both hugely relaxing and slightly energizing. There is no good analogy really to what I was experiencing, but it felt fundamental, natural, and holistic - not like something that had been missing but like something that had been misplaced and then found again. There was a sense of recognition. A friend of mine jokingly suggested that I had been degaussed, and that may be a good analogy. Maybe I was like a computer screen that had developed an unhealthy static charge, and the orgonite was like the degauss button on old cathode ray computer monitors. You hit the button and the screen goes "Whaaang" and is suddenly clear again.

The online literature about orgonite suggests that it somehow overrides or purges the body of chaotic vibrations that accumulate with special virulence in the age of electronic communication with powerful cell phone towers, radar towers, and radio towers poking up everywhere now. With a cell phone in every pocket electrosmog has become pandemic. Mind you, the idea of electrosmog being such a problem for bioorganisms had been for me prior to orgonite just an idea. I had no way of personally verifying that probably because the onset of the smog had been gradual enough as the electronic age burgeoned that like the frog in the slowly heated pot of water I didn't know I had been boiled, but if what happened to me during my first orgonite experience had really been a lifting of electrostress then suddenly my eyes had been opened. I had been under an influence that was much stronger than I had realized.

I am still unsure about orgonite theory as to causes and effects and the physics thereof, and orgone energy may attest to a part of the world we do not much understand as yet, but there are certain dots that connect and patterns I have seen that point in a certain direction. A paradox of orgonite is that the stronger the EMF field it is subjected to the sweeter and more powerful the vibe streaming out of it. One of the most effective orgone field generators is a cell phone perched on or sitting next to a piece of orgonite. Another strong generator can be made by perching orgonite on your home's electrical fuse panel. Another way is to place orgonite near a wireless router. The orgoniteer out a'field in the world places orgonite at the base of broadcasting and relay towers. All of this seems to indicate an intimate connection between orgonite and EMR fields. It is a reasonable deduction. The density of the metal shavings also needs to be matched to the strength of the EM field - stronger sources of pollution call for orgonite of a higher density while weaker sources are more efficiently processed by lower density orgonite. Within my plaques there is a gradient of density from high to low so as to respond appropriately to a wide spectrum of offending fields.

By the way, it needs to be emphasized that orgonite does not in any way interfere with electronic signals. It will not obstruct your cell phone signal for instance. Truth be told, the original signal is not modified by orgonite at all. It is simply that you body is being suffused with enough coherent orgone energy that it can better withstand the electronic assault.

You may have also noticed that I use the terms orgonite and orgonia interchangeably. Orgonite has become the generic term for this material, but the person who coined the term years ago has now trademarked it. Sellers can't use the term directly in their product descriptions, but in expository writing it is still ok. I came up with the term orgonia which I liked the ring of - it can be both the material and an imaginal realm - where things orgonic hold sway. I suppose I could argue that this wall hung orgonite (orgonia I mean) is different enough to justify a unique name. A home or office's walls are drums. They vibrate in reaction to the acoustic environment - to footfalls, closing doors, music, the human voice, weather, etc. The quartz in the plaque is not only sensitive to electromagnetic waves - it is also responsive to acoustics. Quartz vibrated by sound will create an electric current. so hanging a flat piece of orgonia on a resonant wall may energize the material in a more lively fashion as life goes on around it.

Originally I imagined these plaques hanging in homes and bringing breathing space and peace to the dwellers therein, but then another image took hold as well - perhaps these would also have a place in boardrooms, and conference rooms, and places of power where difficult decisions of import are made, and where mood is sometimes just as critical as ideology and bias in coming to agreement. I saw them hanging in war rooms. Could these plaques influence thinking in high places? I think so. I hope so.

"Child's" drawing of an orgonite pendant doing its work. The object on the left is a cell phone tower. 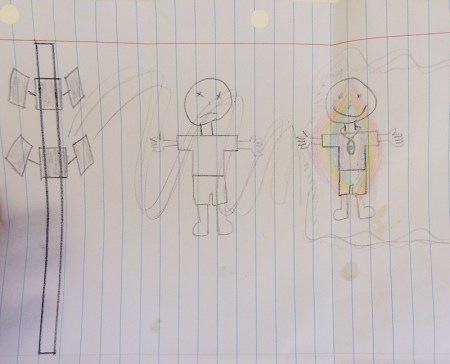