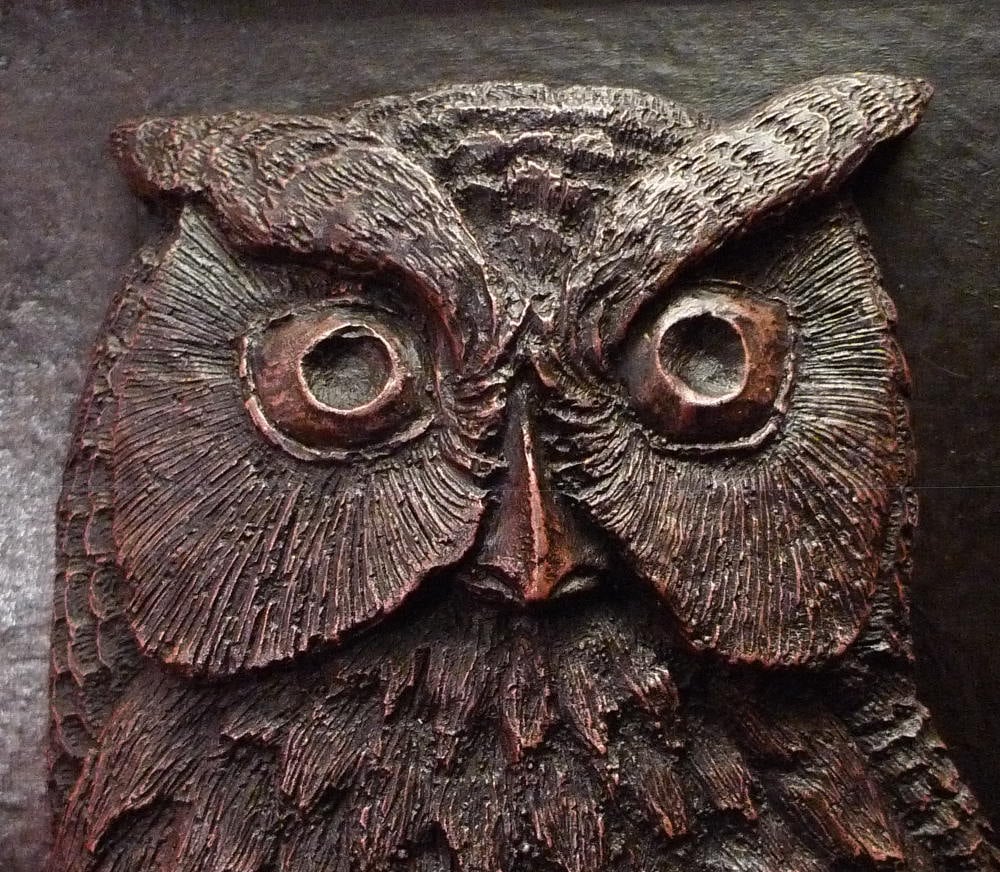 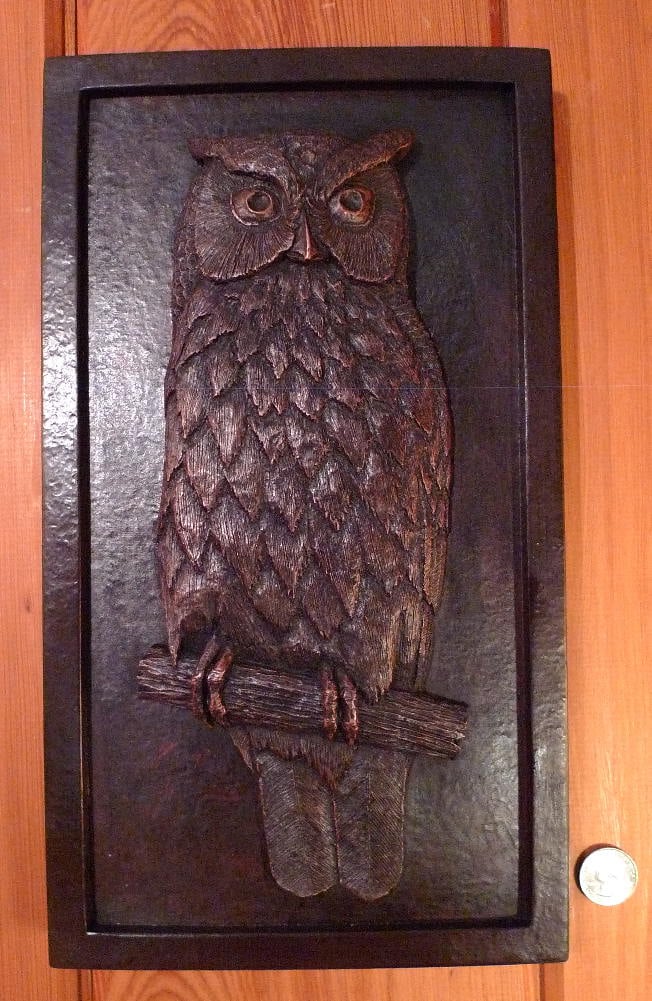 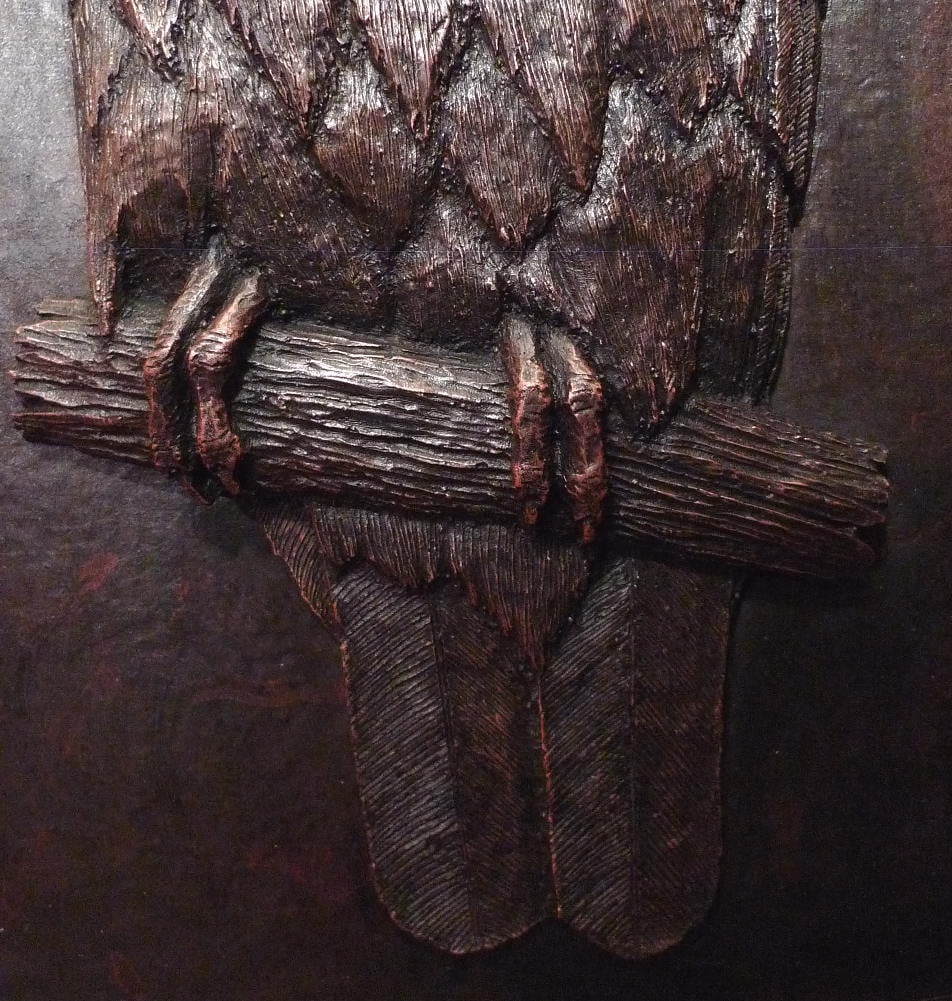 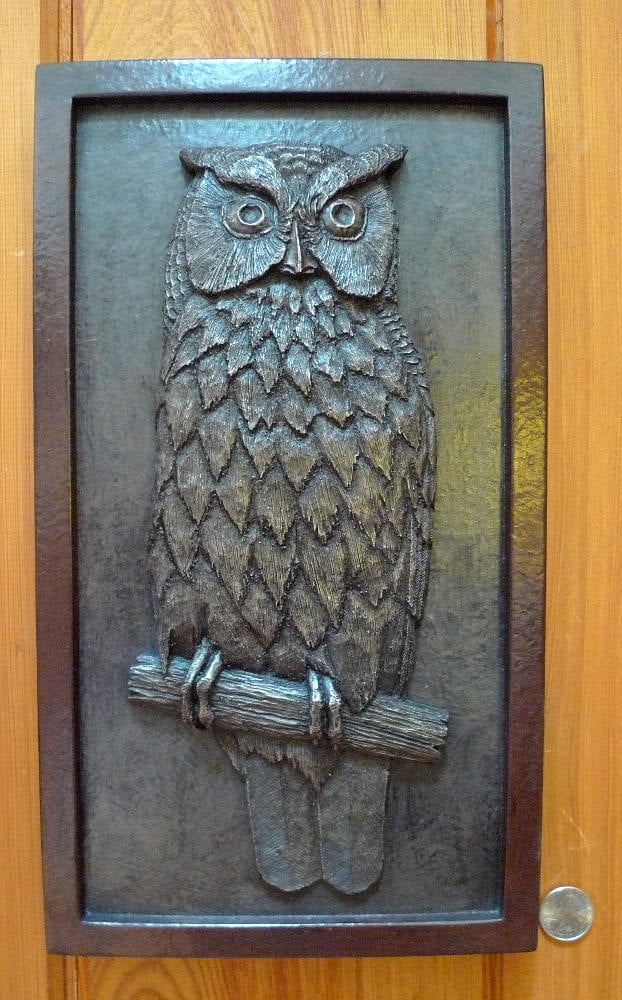 "Synchronicity is an ever present reality for those who have eyes to see."
Carl Jung

This much larger owl plaque was inspired by an uncanny spate of “owl synchronicities” that happened to me this last (2015) Thanksgiving. As the synchronicities began to pile up over the space of a week I began to reconstruct where the whole affair had probably begun.
A synopsis – my family was on a jaunt to Houston, TX (where much of my extended family lives,) and one of our excursions took us to the Menil Museum which houses an extensive collection of African masks and ritual objects. Particularly arresting were the owl effigies and in particular this one at which I lingered for some time:

The next day we were treated to a private showing of a wonderful little documentary (Rara Avis) about John Audubon in which his owl prints figured prominently.

Then upon returning home on Monday Orgonia started getting orders for owl plaques one after another – four in a row – one order being for 5 plaques – with the final tally being 8 owl plaques ordered consecutively. The first owl plaque had been ordered by someone who lived a few miles from the Austin, TX airport from which we had flown home. The last order in the "run" came in from Australia.

As this pattern was unfolding I emailed my friend Laura Bruno, whose “alternative” blog is one of my favorites, to get her reaction and feedback. Owl synchronicities are a much rumored if still obscure phenomenon, but I figured if anyone had some interesting chatter about this it would be Laura. The very next day she sent me an exclamatory email linking to that mornings’s debut on Amazon of a 400 page collection of owl synchronicity stories which book I highly recommend (“E. Long” is my Amazon reviewer name.)

Make of this what you will it certainly grabbed my attention and set me on the road to coming up with a bigger owl statement in my orgonite plaque line up. This Great Horned Owl has the gravitas and refinement I was looking for. It's a big hunk of orgonite energy beaming out through the eyes of potent being.

Note: the 5th photograph shows the plaque in bronze with a copper frame. There are purchase options for either bronze or copper at the "add to cart" button.